India is growing in every possible way — economy, development of rural areas, and most importantly, gender equality like never before. Once upon a time, there was this India that needed women to live in the confined environments of their family only. And now, we see India coming out with various welfare programs for the development of women. Government officials go to the most remote villages and encourage women with new ways of converting their niche into something that will help them create a self-sufficient source of income.

This is one such story, a story of 12 women from Thanikandi, a tribal village in the Coimbatore district. These women decided to open a small eatery together. Little did they imagine that this small step will turn them into owners of a thriving business that will improve their standards of living. And more importantly, it has allowed them to understand their potential to do something on their own and explore the same.

What Is This Eatery About? 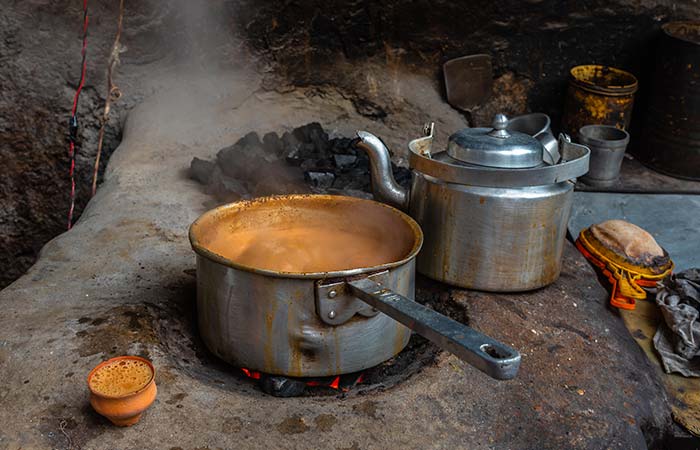 We all must have heard about the famous Adiyogi, a spiritual center in Coimbatore district, haven’t we? At Adiyogi, this little eatery offers tea, savories, coffee, and other snacks to the tourists. All their items are priced economically and their eatery is very famous among the tourists there. They are situated at a place where the Adiyogi visitors disembark from their tiring long journeys and provide an eight-seater buggy, an offshoot of their enterprise.

How It All Started?

It all began the moment Swami Chidakasha paid a visit to Thanikandi. This visit was made because of the Isha Foundation’s tribal welfare program. During this visit, Swami put forth the idea of a women-run tea shop at Adiyogi. The prime objective was to encourage women to set up and sustain an activity that generates income for the women, which would eventually better their living standards. This idea is so simple yet, incredible, isn’t it? But to implement it, in reality, was not as simple. It was more than what one would call a challenge.

Why Was It So Challenging? 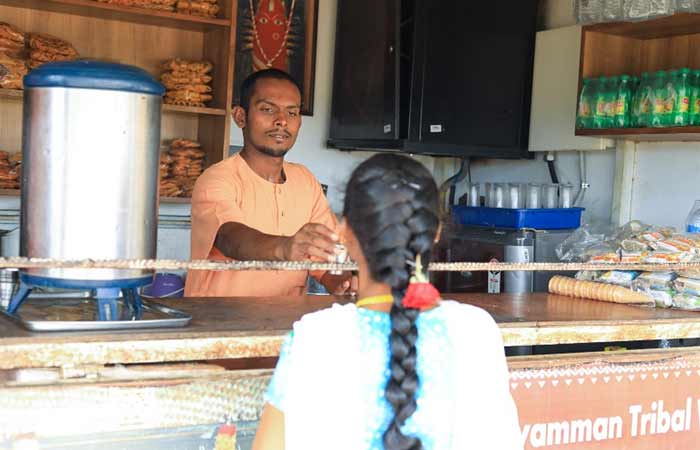 As mentioned earlier, Thanikandi is a tribal village that lies in a dense forest and has 200 or lesser inhabitants. Though rural Tamil Nadu usually follows agriculture, this tribal village didn’t! The residents of this village got their income coming from either from infrequent farm labor or from doing daily wage work. This village doesn’t have a graduate till date, signaling that most of the people here are illiterates.

The tribal community of this village relies majorly on government schemes and other welfare activities that are carried out by non-governmental groups. When Swami proposed the idea of tea stall run by only women, there were no takers for it. However, Swami didn’t give up. He kept visiting the village with his team and focused on counseling the ladies of this village who were already working in the community kitchen of the Isha center. It’s because of his continuous insistence that few of the women decided to nod to the idea.

The Start Of Their Enterprise

Finally, 12 women came together and agreed to make Swami’s floating idea a reality. Each of them invested Rs 200 and started their small tea stall on April 8, 2018. Whatever they required for the tea stall — the stove, utensils, and other kitchen items — they borrowed it from their homes, neighbors or the Isha canteen. It was Swami Chidakasha who trained these twelve women right from scratch. He taught them how to make tea, greet customers, price their products, handle accounts, and most importantly he taught them how to work as a team. 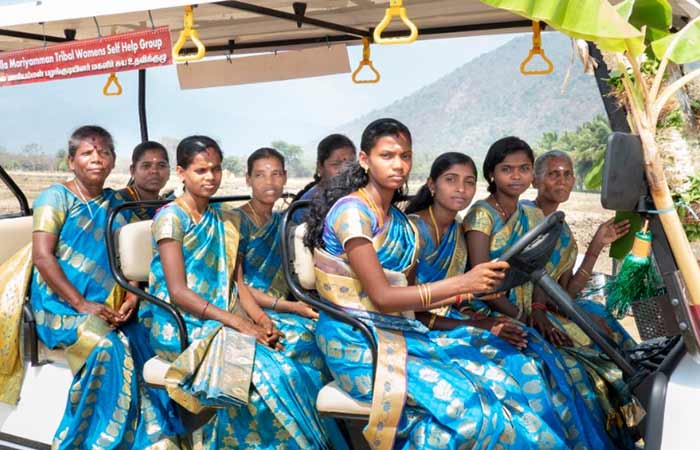 The enterprise defied everybody’s wildest expectations and generated revenue of Rs 90,000 in the very first month. The women got their share of profits as well. Four months into this, a profit of Rs 1,65,000 was made and each of the women got to take Rs 15,000 home. This was more money than they had ever imagined.

The success of this enterprise provided inspiration to other village members. The story of this women-run tea stall was covered by the local news channels and the 12 women attained celebrity status amid the nearby villages as well.

The enterprise generated revenue of Rs 24 lakh by its first anniversary with a profit of Rs 9.5 lakh. It sure did start as a small tea stall but it has now converted into an eatery that stocks items on their menu. The 12 women managed to return everything they had borrowed to run the business and bought their items with the profits they earned. In fact, within six months they even replaced their three-seater buggy with an eight-seater one to ferry the tourists from bus drop-offs to the Isha Foundation. The women credit their achievements to Swani Chidakasha and are only aiming to grow and scale greater heights with their business.

It’s amazing how a small floating idea of Swami Chidkasha turned the lives of ordinary women, right? This story is an example that it only takes one small idea and some practical planning to start on a journey to make life better.

The post From An Investment Of Rs 2400 To Annual Turnover Of Rs 24 Lakh: How Women In A Tribal Village Took Control Of Their Life appeared first on STYLECRAZE.

People Who Are Late: Things You’ll Relate To If You Are Late All The Time Everywhere