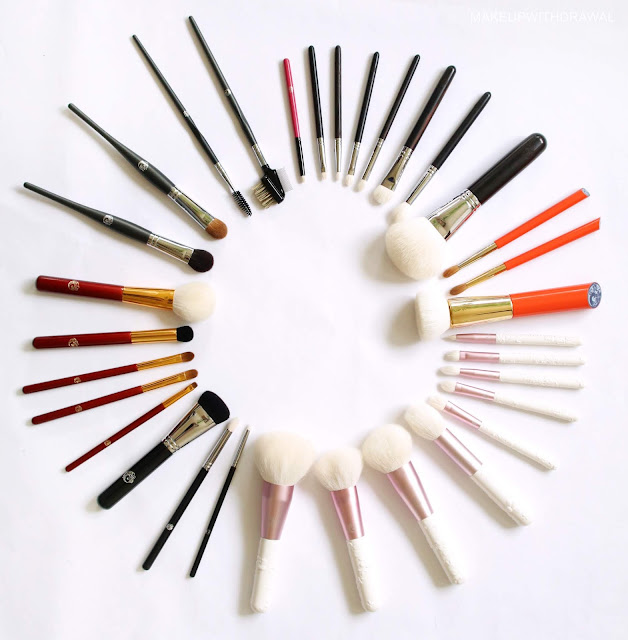 Energy is another brand of Chinese brushes that I really enjoy. I’ve had the pleasure of accumulating quite a few over the last four years and it is high time that I did a brand overview. Like the brand ShouShouLang, not too many English reviews are out there. This is both understandable and lamentable, I think the word needs to get out about how some of these brushes are the absolute bees’ knees.

Apologies ahead of time for not having the name/number of most of these brushes. I’ve purchased them over a long period of time and sometimes family members ordered them on my behalf so I can’t scroll through purchase history and find them again. 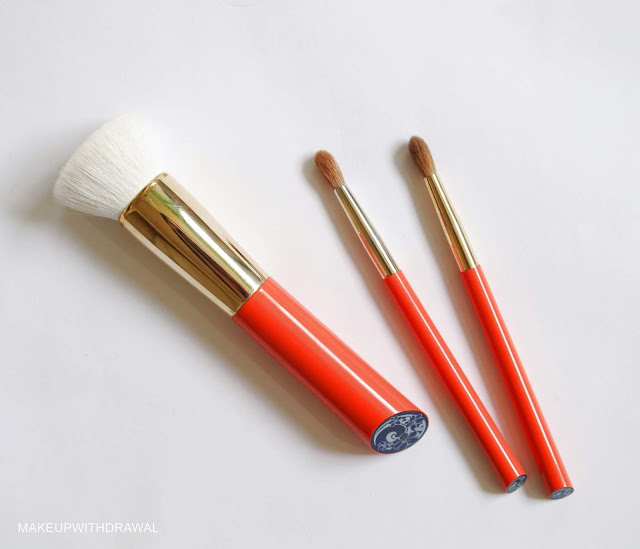 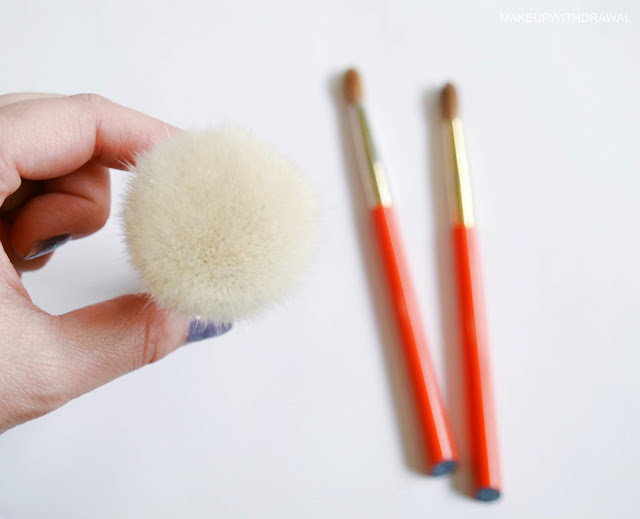 Some of Energy’s brushes are straight up imitations of Hakuhodo’s Vermilion brushes. The flat top one is similar to S5557 in style, but without the slant of the cut of the brush (also the price; $117 vs $13, respectively). The bristles are pretty soft and very dense, there was a slight bit of shedding to this one but it stopped after three washes. The rounded blender is made out of a fantastic weasel, I bought two of them, two years apart and the heads are very well matched. The hairs are resilient, smooth and the curvature is perfect for the density – no poor cousin to Kolinsky! In usage, I find Energy’s weasel and my Kolinksy to be near equals. They were about $9 each, which is frankly absurdly low. The only difference between the two brushes is that one has the model number, S141 printed about 1cm lower than the other on the handle. The Energy logo is on the flat end of the brush. I don’t relish this knock-off attitude, but I cannot deny that the blender is absolutely fantastic. I loved it enough to buy a backup, not something I do all that often. 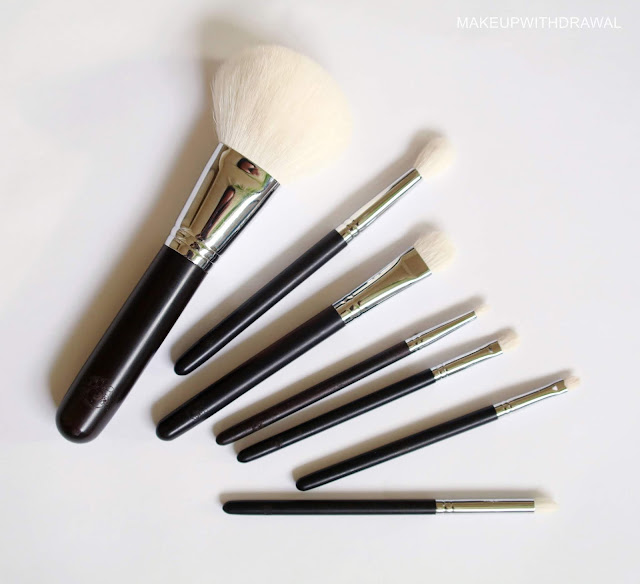 The big ebony powder brush with white goat is a brush I have wanted for six years! Originally it had a silver logo, but when I emailed the company to inquire about it, they replied back that it was no longer available. Last year I happened upon what looked like the very same brush head but with laser etching instead of a silver logo on the ebony handle. I think it’s even more handsome this way. The quality of the white goat hair on this brush is on par with rephr’s goat. While the hair diameter is a tiny bit thicker on the Energy, it’s much glossier in the light and the coloring is whiter. The two are neck in neck, softness wise.

Like the big ebony powder brush, there’s a matching set of six ebony handled eye brushes. While I enjoy the variety of shapes, I find that the perimeters of the brush heads are not very refined, and are just a tad bit poofier than I like. Even when I shape them with my fingers while wet, they fluff out a bit too much during the drying period. Usually I let them dry like 50-90% then put small eye brush sized brush guards over them. 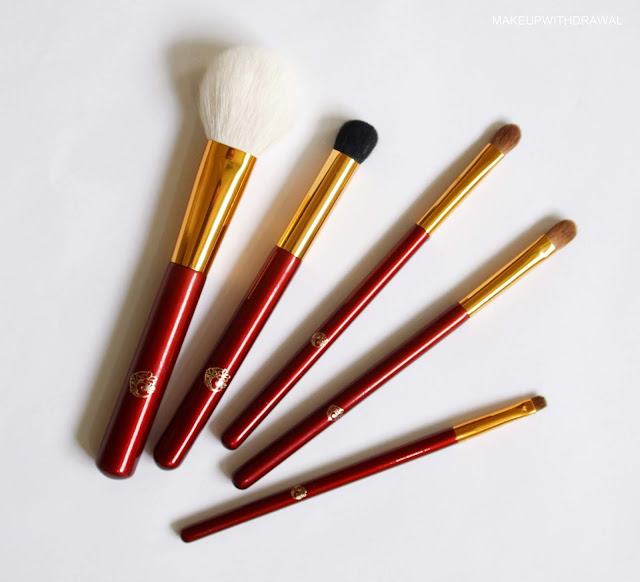 These are my five brushes from the Claret series. One I have two of, the very nice weasel, not quite on the same level Kolinsky but a close cousin. Wonderfully slick and uniform hairs with exceptional resilience. On the far right is a small little detail brush made of the same weasel. The black goat brush is an under utilized shape, I wish there were more rounded domes around this size on the brush market. It’s great for buffing in concealer, contouring the nose, sheering out a base of cream eye shadow all over your eyelid. It reminds me a lot of Hakuhodo J214 though the black goat is a bit coarser.

Lastly, there’s an over sized highlight /powder brush that’s made from Energy’s XGF (Xi Guang Feng), one of the top tiers of goat. It’s definitely softer than my rephr and Koyudo white goat brushes,  but not quite as pleasant as my Tom Ford or Hakuhodo. It’s a bit loose in the bundling though, a denser packing of the hairs would make it even greater. One thing to note, while I love these brushes, they did smell pretty damn awful when they first arrived. Like strong adhesive and even stronger perfume, no doubt a mistaken attempt to cover up the chemical odor. It went away after three good washes. 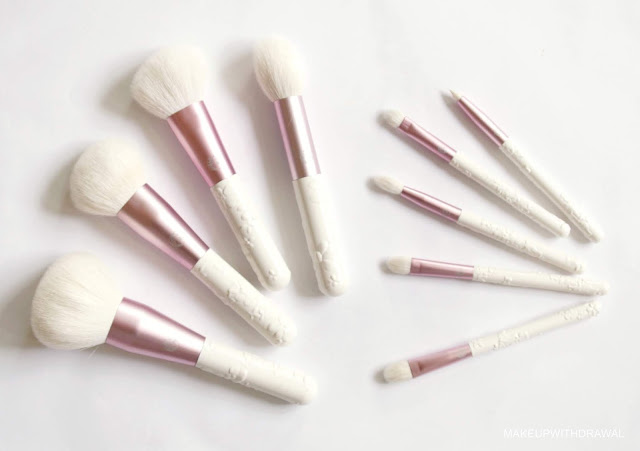 Camellia series set. These were slightly mothball-y when they arrived, but it washed away after two cleanings like my Tanseido brushes. I don’t hold that against brush manufacturers, gotta do what you gotta do to keep moths from devastating your stock of natural hairs. This is not the softest of the Energy brushes that I have, but they’re still far superior to the likes of Morphe or Zoeva and are far denser than MAC brushes. Though the hairs are bit coarser than the rest, they are actually whiter and glossier in appearance than my other Energy brushes. There’s a brow brush in this set too, but I misplaced it so it didn’t make this group photo. It’s bristles are firm but smooth, it is densely packed but doesn’t draw the sharpest lines. 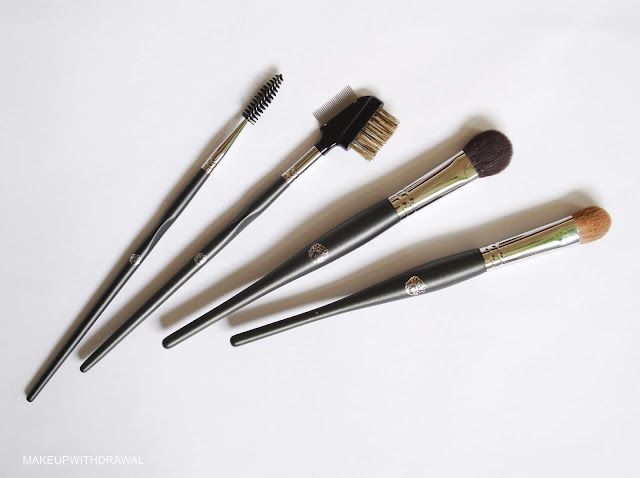 These four curved handled brushes with carved out sections are my newest additions, the other brushes I have had for years but these I picked up on my last trip to China.  The big weasel round brush is a delight – so often brushes like this are flattened but the curved thick edge of this brush is really unusual. The dyed goat brush next to it isn’t as thick, but it is amazingly soft – I triple checked the listing after I bought it with my mom’s Taobao account when I was in Shanghai that it wasn’t squirrel, it just blew me away with how fluffy and silken it was. The brow and lash combo comb isn’t bad, there were a few hairs on the stiff boar bristle side that were a couple millimeters longer than the rest – the precision isn’t quite there. The spoolie is so-so (but nicer quality than my Chikuhodo R series one which had a loose spinning ferrule), it’s main attraction was the price. I want to say that the spoolie and lash comb were only about $3 each or so, if memory serves. 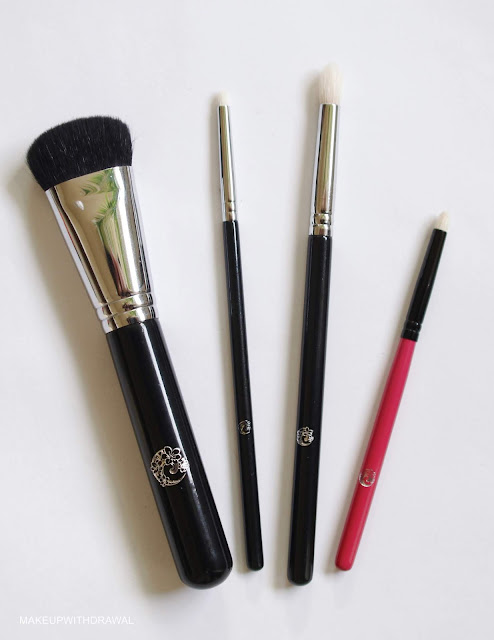 On the left is one of the best offerings from Energy, a goat contour brush that is super dense and has a slightly curved profile. I like using this brush to undercut my cheekbones for some really sharply defined cheekbones. I find that fluffier ones can really move the product further around than I want contour to go, but this one creates a knife sharp shadow. I use this with contour powders that are lightly pigmented, you wouldn’t want to have to blend too much with this brush. It just isn’t very well suited for that.  The three remaining brushes are also goat, but white goat.

The one second from the left brush is close to Hakuhodo 5515BKsL but not as soft (but priced really well, I think it amounted to $5), the second from the right has softer hairs and has a shape that you don’t see too much in western brushes – pointed blender. It’s compact enough to place color in shallow creases but can also smudge out shadow placed on the lash line or blend in the outer corners of hooded eyes. Great brush! The small pencil I like but I frequently misplace because of how short it is, it just gets lost in my brush jars.

One thing to note, I’ve heard from other people that some of the silver logo can wear away (nothing new to us Hakuhodo lovers, eh?), Emi @projectswatch showed me how the logo on her squirrel brush had faded away pretty much completely. I think this may vary from series to series within the brand, my selections tend to be etched and inlaid with silver rather than silver stamped on top of lacquer. Or they are laser etched without any inlay at all. I have four silver inlaid brushes and so far none of them have had the logo rub away even though I’ve had them for about 2-3 years each. Fingers crossed they stay that way.

My top picks from this brand are the large ebony face brush, the weasel brushes from the Claret series, the contour brush with the straight black handle, and all of the long handled brushes with the facets (second to last photo). However, if you were getting brushes for a beginner, the Camellia series ain’t half bad either for the price. They were $35ish when I bought them for the set and much less scratchy compared to the Zoeva, Morphe that I’ve tried.

I do think that the brushes Energy does best are the ones that are original to the brand. Yeah, they make good imitations of Hakuhodo Vermilion brushes at a much more agreeable price, but it doesn’t leave a great taste in my mouth. I like original, unique work!

The best place to buy Energy Brushes is Taobao, in terms of price. The downside to Taobao is that not every product is available on the international versions of the website, and navigating the mainland China version is quite the hassle, not to mention the fees + shipping if you utilize a buying agent. The easier option is AliExpress, Energy has an official store there, but there can be quite a bit of markup for each brush and the prices fluctuates wildly. I usually add things to my cart and wait for a sale, brushes can go down over 50% from their starting list price.

Overall, Energy is a lesser known brand that I think many people would enjoy if they were the sample the right brushes from their various lines.

Insane amount of brushes were all purchased by me, with the exception of the one pink handled brush which was a freebie. For additional information, please refer to my Disclosure Policy.